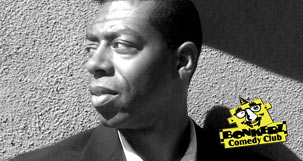 The son of a hustling father and a preaching mother, Diaz Mackie was poised to leave his mark. Growing up in Michigan during the mid-80s & 90s has shaped & molded a comedic star on the rise and has given his comedy a fresh and upbeat rhythm. Diaz Mackie, "The Golden Child", in just a short time has made two TV appearances "Audacity Entertainment" and "Smooth Vegas Nights" as well as a finalist in season two's Def Comedy Jam auditions.