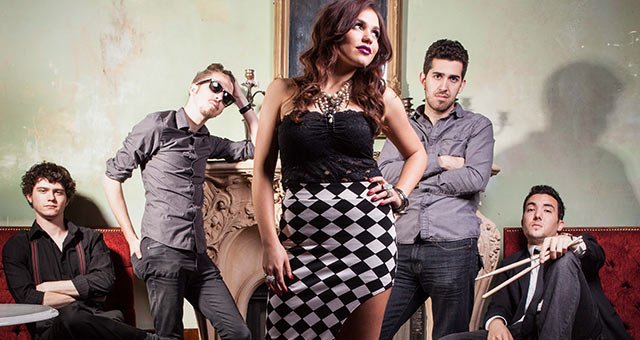 Last year was very exciting for the L.A.-based band, Flavia & The Red. They were chosen from hundreds of bands nationwide to go to Milwaukee, Wisconsin and perform on one of the main stages at Summerfest, where they won second place in the “Land the Big Gig” competition. In L.A. they gained bi-monthly residencies at two of the hottest clubs in the city—Pour Vous in Hollywood and Nic’s Martini Lounge in Beverly Hills. Last but not least, they released their debut album “Too Late to Cry” to an energetic audience at the Bootleg Theatre on December 14.

Flavia, 21, has shot onto the music scene like a bullet, bringing her band—The Red—with her. As the principal singer and songwriter, Flavia’s stage presence is the personification of the color red—emotional, fiery and passionate. However, a talented front woman is only as good as her band. After gigging for a few years and going through lineup changes, the band now consists of Chris Pucher on guitar, Isaac Watts on drums, Rich Brown on keys and Max Benson on bass. Each member contributes his and her own unique qualities and influences to the secret recipe that is The Red’s musically energetic and soulful brew. The band’s overall sound contains elements of classic and modern R&B, pop and bluesy rock. Anchored by a tight rhythm section, the music exhibits memorable melodies and interactive improvisation with Flavia’s emotional and poetic lyrics at the forefront.

Flavia & The Red are excited to see where 2013 will take them. They have already been featured on various blogs and magazines and are being played on radio stations around the U.S. They are constantly writing new material while looking for new places to play as a U.S. tour is in the works.