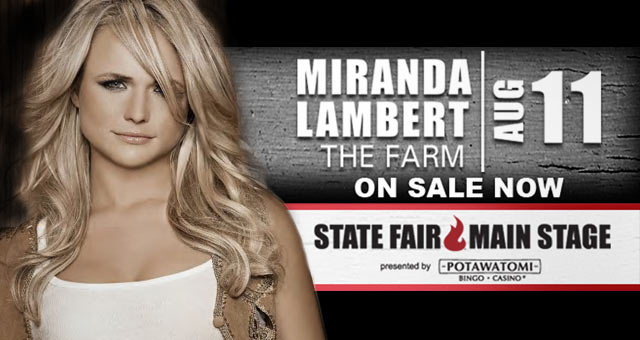 MIRANDA LAMBERT with The Farm

We’ve partnered with Wisconsin State Fair to present one of the biggest names in country music.

Famous for her feisty personality, mix of reflective and rowdy country songs, and celebrity husband (Blake Shelton), Miranda Lambert was named Female Vocalist of the Year at 2013’s Academy of Country Music Awards (also winning Record of the Year and Single of the Year for “Over You”).

In addition, this Grammy® Award-winning vocalist was also the first artist in 47 years to have her first four albums debut at No. 1 on the Billboard Top Country Albums Chart. With number one singles like “White Liar,” “The House That Built Me” and “Heart Like Mine,” Miranda Lambert has long been a fan favorite in her genre.

Country trio The Farm will open this must-see show. Tickets are on sale now at WiStateFair.com and the Fair Ticket Office. General admission standing-room-only track tickets and reserved grandstand seating: $49/$39.