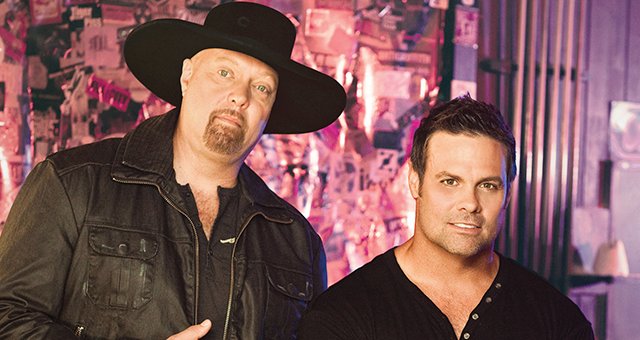 Montgomery Gentry is back. With a new album, a new label and a renewed sense of musical purpose, Eddie Montgomery and Troy Gentry are poised to stake their claim as one of country music’s all-time greatest duos.

When the two Kentucky boys first busted onto the national scene in 1999 with the defiant “Hillbilly Shoes” notice was served—country music had never seen a hard driving duo like this. The duo’s new collection, the aptly titled Rebels On The Run, brings Montgomery Gentry fans back to the beginning, but with a fresh attitude. Despite the millions of albums sold, the sold out shows and the scores of awards and accolades, Montgomery Gentry remains in touch with its working class roots. “We are blue collar workers and we lived the songs that we sing,” says Troy. “Because of that, our fans are able to make the connection and when they hear our songs, they know we are singing with passion and we know what we are talking about.”

The duo has scored fourteen Top 10 singles, including five No. 1s. Their latest album is certain to add to that total. Now signed to a powerhouse independent label, Montgomery Gentry has found the freedom the duo needs to move to the next level of their career. Whether it’s headlining tours, scoring a Grammy nomination, winning Country Music Association and Academy of Country Music Awards, garnering critical acclaim or simply earning the admiration of their millions of fans, Eddie and Troy have met the criteria reserved for but a few in country music history. But awards and accolades aside, “We grew up on Charlie Daniels, Waylon Jennings, Willie Nelson, Lynyrd Skynyrd and Merle Haggard,” Eddie says with conviction. “That’s who we are. We cut our teeth in the honky tonks and no matter what you try to do, we have to be us or it just doesn’t sound right.”