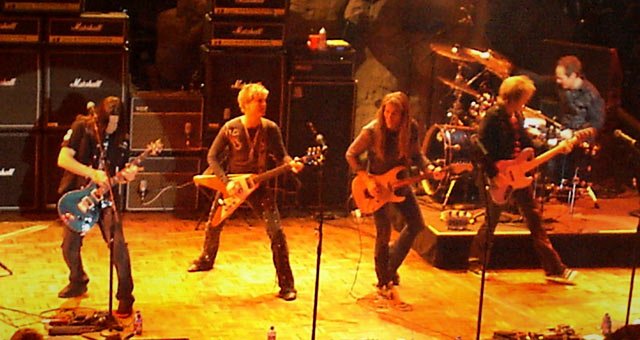 Once upon a time, music didn’t take itself so seriously. Performance was just as important as the talent behind the art, if not more. Music didn’t suffer from being boring. In fact, it didn’t quit. Bands wrote party anthems just as often as they wrote ballads. Men wore their hair long, and teased if necessary. The golden age of hair metal was born, and we still celebrate it in one “best of” compilation after another.

But what if you didn’t have to buy “Freedom Rock” from an infomercial? What if you could hear a greatest hits compilation live? That’s what Gunnar Nelson (of the twin duo, Nelson) thought as he assembled the best live greatest hits band. Focused on the hit, Gunnar enlisted some help, namely from his brother Matthew, and the two set out on a recruiting expedition.

Gunnar and Matthew Nelson set forth to find their hirsute brethren in Mark Slaughter (Slaughter), Janet Gardner (Vixen), Kelly Keagy (Night Ranger) and feature even more special guests live. Joined by a tight band, the team performs different sets as they focus on the number one hits the audiences always love. The show itself is a spectacle as you see how each lead singer is willing to share the stage with one another, delivering an enjoyable set spanning the ’80s and ’90s.

Scrap Metal might be the leftovers from other 1980s and ’90s bands, but this time, the leftovers are the parts you wanted all along: the hits!