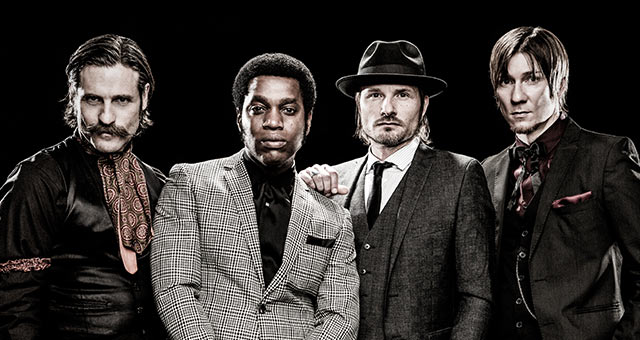 Vintage Trouble formed in 2010 out of the ashes of a few other bands, and not by chance, Ty Taylor (vocal) and Nalle Colt (guitar) teamed up with drummer Richard Danielson and bassist Rick Barrio Dill. They entered The Bomb Shelter Studio, recorded an album's worth of material in three days, which was intended to be demos and ended up being pressed into CDs. The Bomb Shelter Sessions became Vintage Trouble’s first album.

The release of The Bomb Shelter Sessions, combined with their electric live show has catapulted Vintage Trouble into the US limelight, earning them a sponsorship by Supercuts, an iTunes rock download of the week for new song “Pelvis Pusher,” along with praise from NPR, Rolling Stone, The Wall Street Journal and Billboard for what The New York Times raves, "Like Otis Redding, Vintage Trouble makes music that is a little bit of everything ... You can slow dance, groove, rock and let it all go."

Vintage Trouble is currently on a world tour and have opened for Lenny Kravitz, The Cranberries, Joss Stone and recently, The Who. Their world tour continues in 2013 with performances at Coachella, Glastonbury and Rock In Rio, a Japanese headlining run and The Who’s European Tour. The band will open for The Rolling Stones at Hyde Park in London this July, and will return to the US for a headlining tour in August.