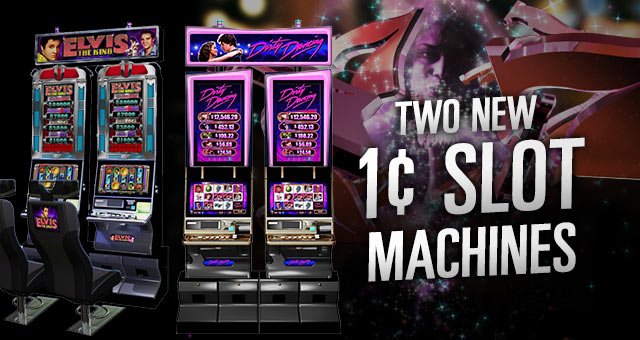 The King has entered the building—at least in video form—with one of our newest 1¢ slot machine game, Elvis the King™, located on the Dreamcatcher side of the Casino near Dream Dance Steak. And in the same bank of slots, you'll have the time of your life playing Dirty Dancing™.

Rock ‘n’ Roll your way to a frenzied win on this 5-reel, 25-line game with scatter pays, a transforming wild feature and bonus features. The “Elvis the King” symbol is wild and substitutes for all symbols except the scatter “TCB Coin” symbol. Three scatter “TCB Coin” symbols in any position on the reels initiates the Greatest Hits bonus feature, where players are prompted to pick a “Gold Record” symbol to award the bonus screen: Hound Dog, Jailhouse Rock, Viva Las Vegas, Heartbreak Hotel or Jukebox.

The Burning Love bonus feature may also occur during each reel spin, and one or more reels may be transformed into “Wild Elvis One Reel,” “Wild Elvis Two Reels” or “Wild Elvis Three Reels” expanding wild symbols.

It’s been 55 years since The King emerged with his controversial music, gyrating hips and the ability to make fans go crazy. Elvis the King celebrates his legacy with stunning surround-sound, featuring all the hits that will leave you all shook up and wanting more.