The bachelorette. Itâ€™s her â€œlast hurrah!â€� Time to cut loose with the girls for a night of fun, celebrating the bride-to-be. Best friends, sisters, cousins, maybe even her momâ€”all dolled up for a night on the town. Itâ€™s her partyâ€¦but itâ€™s just as much yours.

You know she wants to go out in Milwaukeeâ€¦and have a bachelorette party to remember! The questions are:

Time to rally the rest of the girls to discuss! And when you do, consider a place that does it all. A one-stop shop with dinner, drinks, entertainment and gamesâ€”to avoid having to arrange an expensive limo bus, caravanning around town, or having to adhere to a strict timeline for the night.

Nothing says fun and energy like Potawatomi Bingo Casino, and weâ€™ve got it all under one roof (plus free shuttle service to many downtown hotels). Imagine the night that could be!

Walking up at 5 p.m., you take in the modern, earthy atmosphere of Wild Earth Cucina Italiana: swanky, yet warm and welcoming. First to arrive, you head to the bar to start the night with a glass of Pinot Grigio. The girls start trickling in, and soon itâ€™s time to venture into the private dining room for dinner, gifts and girl talk.

A couple orders of Fried Artichokes with White Truffle Mayo later, youâ€™re on to traditional and slightly wild main courses like Lasagna, Alaskan Wild Salmon Penne and Chicken Carbonara. The groupâ€™s able to talk the bride-to-be into indulging in a little something sweet, so you all split a Zuppa Misu and some Gelato, the finishing touches on a fabulous meal.

After that big meal, you feel like you need to move around and burn a few calories. Perfect time for a walk downstairs to The Northern Lights Theater! Youâ€™re just in time to grab seats and order cocktails for the 7:00 p.m. Bonkerz comedy show, where youâ€™ll laugh until your sides hurt (especially when the comedian decides to put the bachelorette group on the spot)!

After the show, itâ€™s game time! The bridal party has opted for untraditional â€œgames,â€� and instead gives the girls a choice of playing slots or table games downstairs on the casino floor. The groupâ€™s divided, so itâ€™s decided to split up for about an hour so each girl can get her favorite game on.

A couple of party-goers opt for the ultra-girly Sex and The Cityâ„¢ progressive slot machine, where they can play together, on the Four Seasons side of the Casino. Sure beats traditional bachelorette game embarrassment!Â 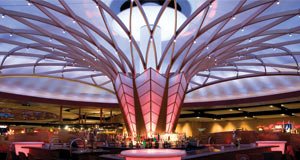 A couple of the girls are â€œup,â€� having won a little something on The Hangover slot machine (ironically), so theyâ€™ve announced that drinks are on them! The bride wants a chocolate martini, so you head to the center of all the actionâ€”to see and be seenâ€”at Bar 360. One thing leads to another, and some random guy is buying molecular energy bombs for the WHOLE party! Turns out he just won it big in the Poker Room.

A few ladies are in need of a snack before bed, so you decide to make one last stop (before catching the shuttle back to the hotel) at the third-floor Food Court. Mozzarella sticks and pizza at Trapperâ€™s Grille hit the spot, as everyone starts to slow down and get a little sleepy.

And so the night ends just like it beganâ€”a group of girls gathered around a table, giggling and recounting stories from the night, accompanied by iPhone pics as evidence of a good time had by all.