We all need a little luck here and there, whether you’re playing at a casino or hoping to ace a job interview. Sometimes we rely on a lucky piece of clothing to help make a decision, or we keep a lucky item in our pocket in the hope it brings us good luck. For some, their luck may depend on a certain number or what’s in their daily horoscope.

We surveyed over 1,200 Americans to better understand their views on “luck” and what habits they may follow to try and ensure that good fortune. 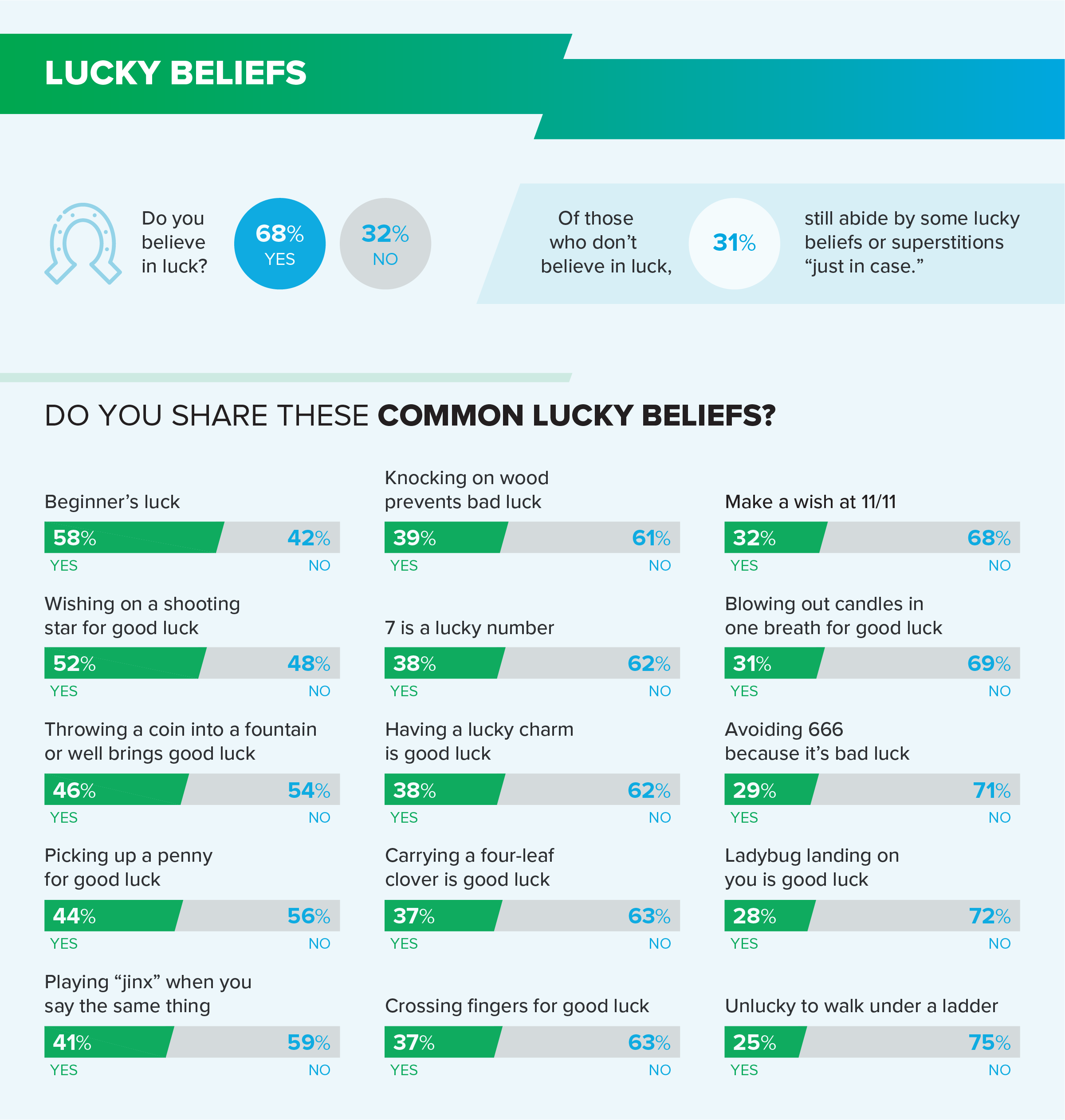 More than two-thirds of the people we surveyed (68%) said they believe in the concept of “luck.” While there are dozens of different common lucky beliefs, some of the most popular among respondents included beginner’s luck, wishing on a shooting star, and throwing coins into a fountain.

Other commonly held lucky beliefs include picking up pennies, crossing fingers, and knocking on wood to prevent bad luck. 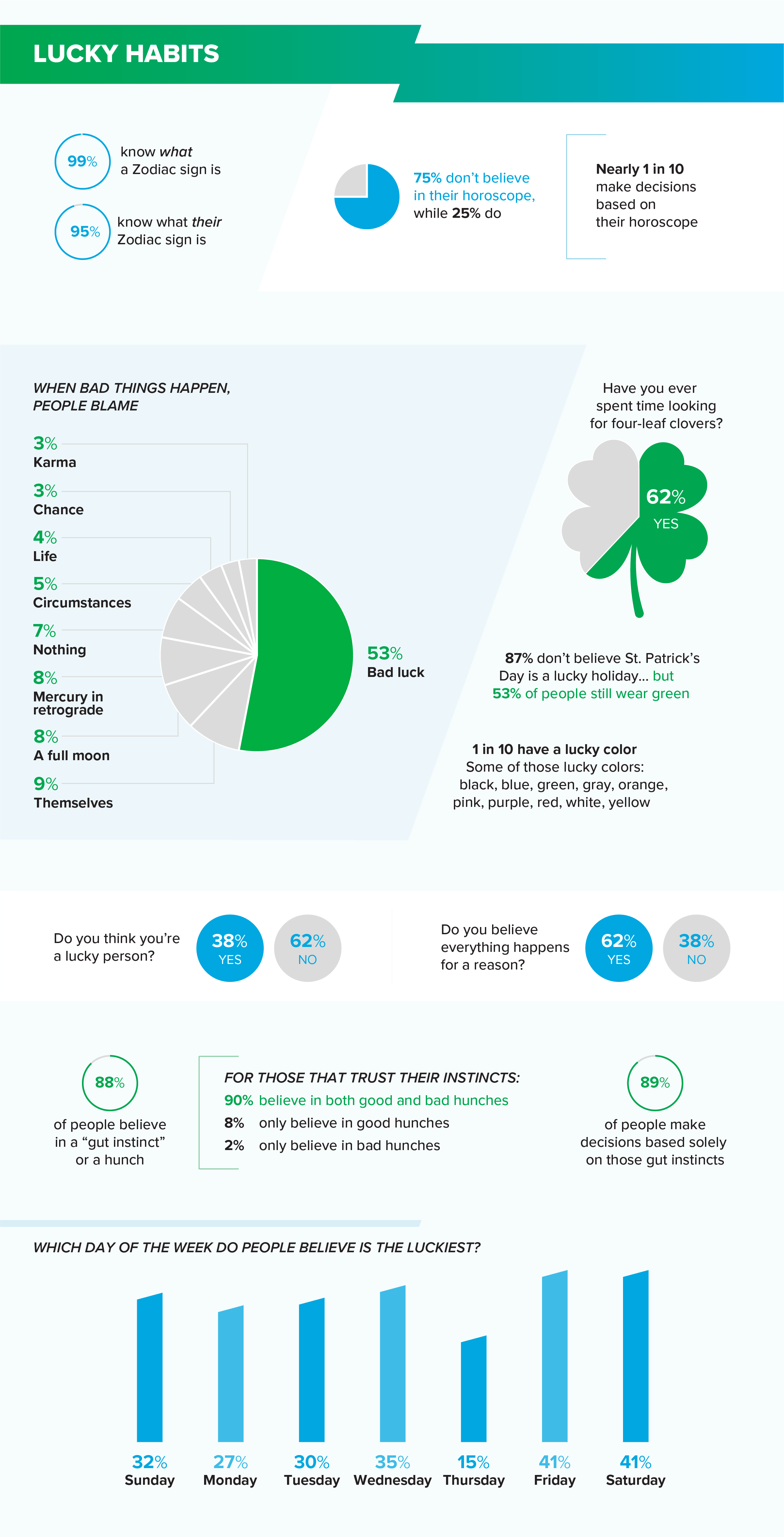 While bad things can be blamed on a full moon or karma, good things could be blamed on items such as a four-leaf clover. Four-leaf clovers are historically known for being lucky items, and 62% of people said they’ve spent time looking for these little plants.

Sometimes just a certain color can help someone’s luck; and colors such as black, blue, green, and gray are among the most common lucky colors. If it’s not a lucky color, maybe it’s a lucky day of the week. Friday and Saturday are believed to be the two most lucky days of the week.

There are also those who just trust their gut instincts, 88% of people said that they believe in those gut hunches and 89% said they make decisions based on those instincts. 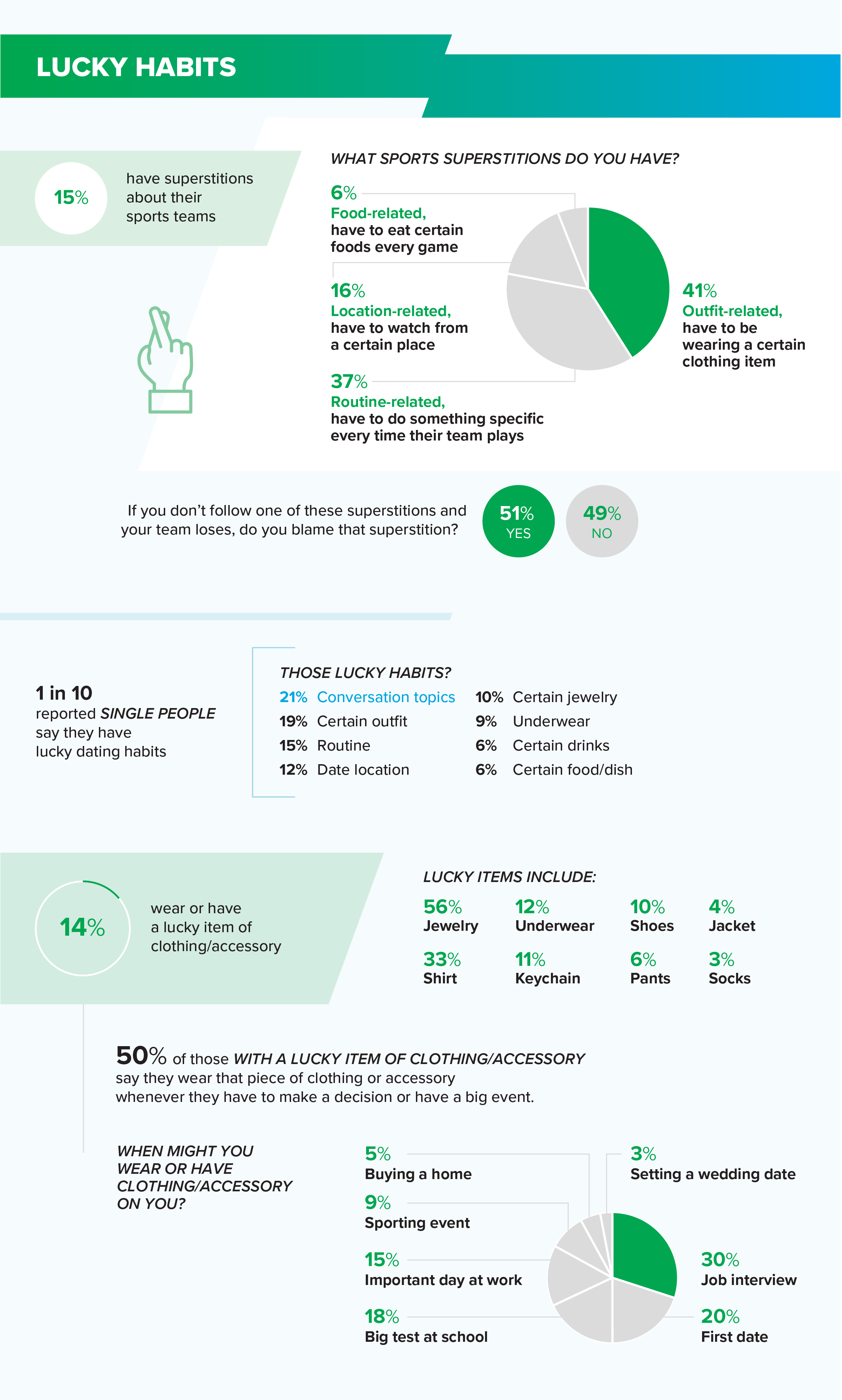 What about needing a little extra luck in the dating world? 1 in 10 reported single people said they have lucky dating habits, including having certain conversation topics, wearing a certain outfit, or going to a specific date location. Believe it or not, 9% also said they have lucky underwear they wear on dates!

Even if someone’s in a relationship, it’s not uncommon for people to have a lucky item or accessory. The most common item believed to be lucky? Jewelry.

50% of those with lucky items or accessories said they wear or hold that item whenever they need to make a big decision or have a big event (or maybe they’re at a casino playing the slots). Some of the most common situations where good luck is needed include a job interview, a first date, an important day at work, or a sporting event. 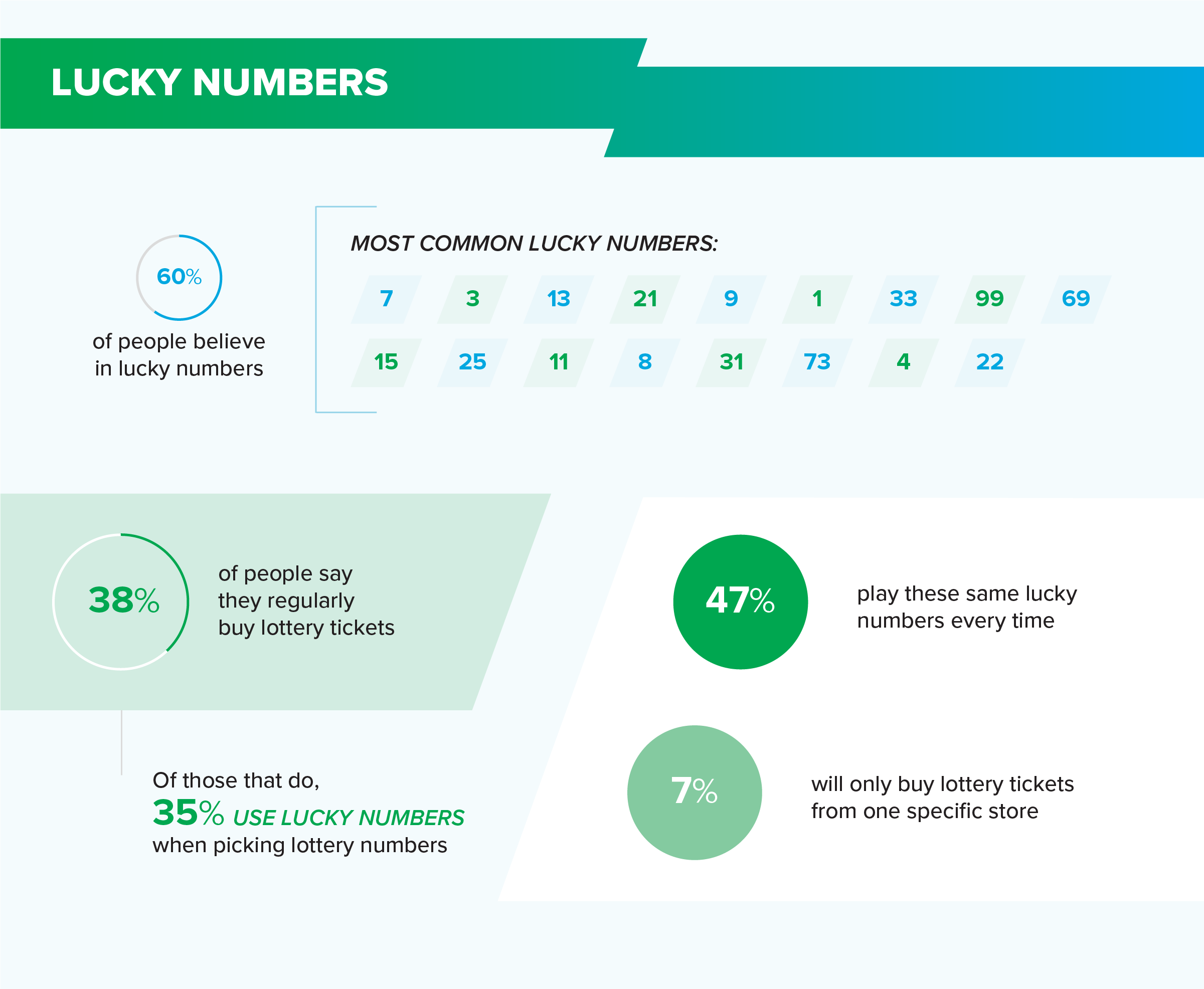 In addition to repeatedly playing their same lucky numbers, 7% said they only buy lottery tickets from one specific store! 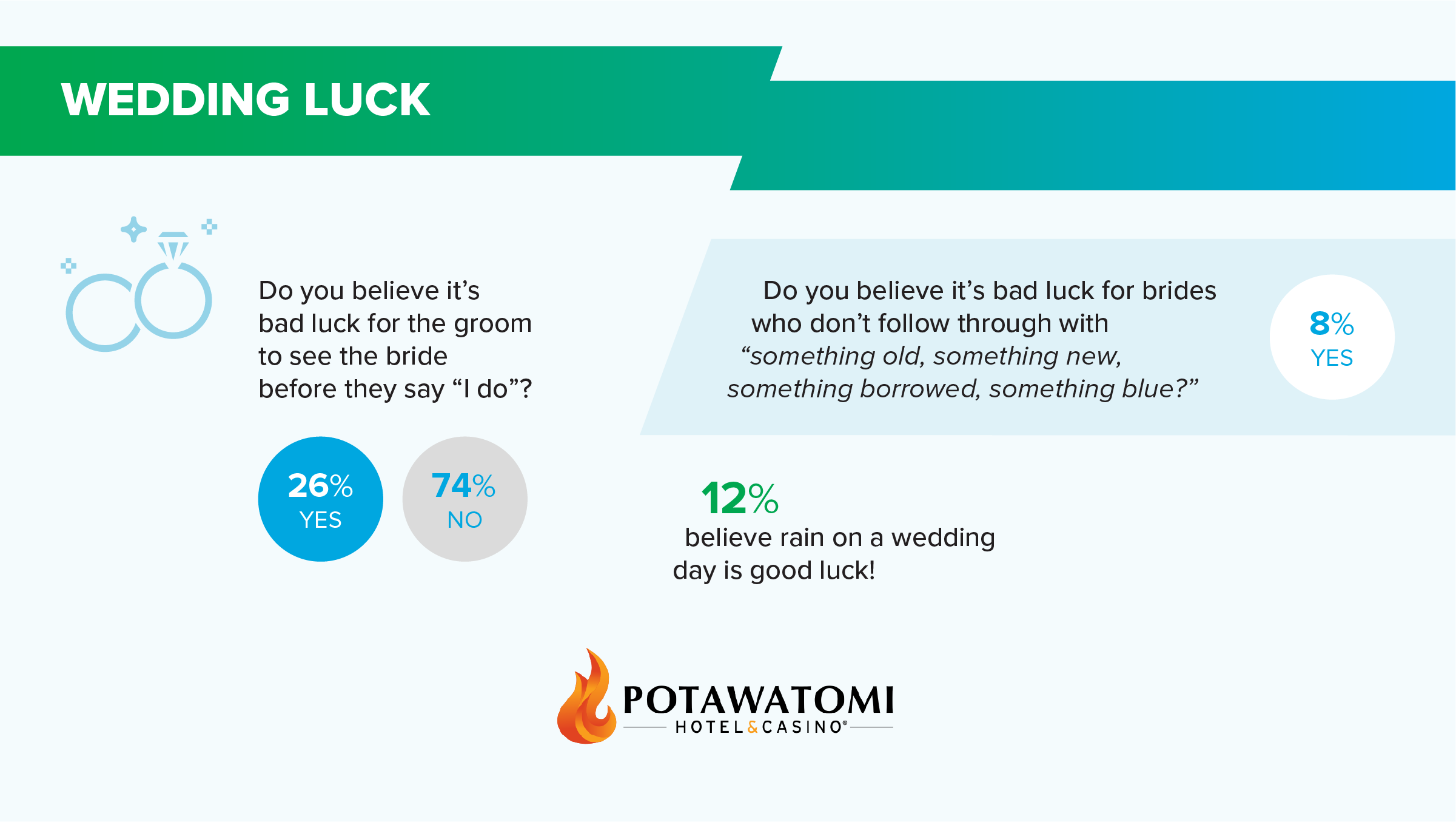 On that special day, brides and grooms may hope certain habits on their wedding day will bring their marriage good luck. But certain rituals, like a “first look,” are becoming more popular and stray from classic wedding traditions. 74% of those we surveyed said they don’t believe it’s bad luck for a groom to see a bride before she walks down the aisle.

Most couples want perfect weather for their special day, but sometimes that poor weather may bring extra luck. More than 1 in 10 said they believe that rain on a wedding day will bring good luck!

In February 2022, we surveyed 1,221 Americans to better understand their beliefs and opinions on lucky habits. Respondents were 48% female and 49% male, with an age range of 18 to 84 and an average age of 38 years old.

When using this data and research, please attribute by linking to this study and citing https://www.paysbig.com/