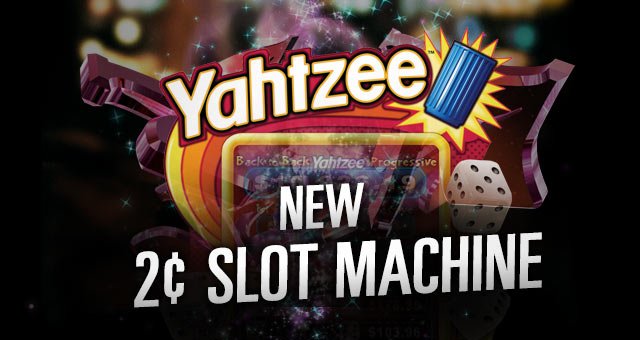 Like the classic dice game, the video reel version of Yahtzee™ will have you at the edge of your seat waiting to see which combination is rolled. But unlike the traditional cup game, this 5-reel, 25-line 2¢ in-house progressive slot machine offers the opportunity to win some serious cash if you play your dice right!

Located near the Grand Lobby, just left of The Buffet entrance, Yahtzee provides players with scatter pays, bonus features and wild multipliers up to 36X!

When three or four “Roll” symbols appear scattered on the reels, players are awarded 50 or 250 times the line bet, respectively. When five “Roll” symbols appear, the “Free Roll 4 to a Yahtzee” feature is initiated, meaning four dice of the same value are held and you get one roll to attempt a Yahtzee. If playing max bet, you’re eligible for the Yahtzee progressive; otherwise credit values are awarded for five-of-a-kind. (If Yahtzee is not achieved, you’ll get credit for a four-of-a-kind.)

The “Yahtzee Bonus” feature occurs when one or more bonus symbols are collected, and a progressive is available if five symbols are collected. In this feature, players get three rolls to achieve a Yahtzee, after which credit values are awarded for two, three or four of a kind (and a progressive for five of a kind). If no pair is achieved, the player gets “Chance” credits.

Roll a “Yahtzee” and get an additional roll. If you’re lucky enough to get another “Yahtzee” on that roll, you’ll receive a Back-to-Back progressive!

You’ve got years of practice shaking that blue dice cup around the table with family and friends—why not shake things up a bit and bet on this pastime favorite?