Saddle Up…We’re Off to the Races! 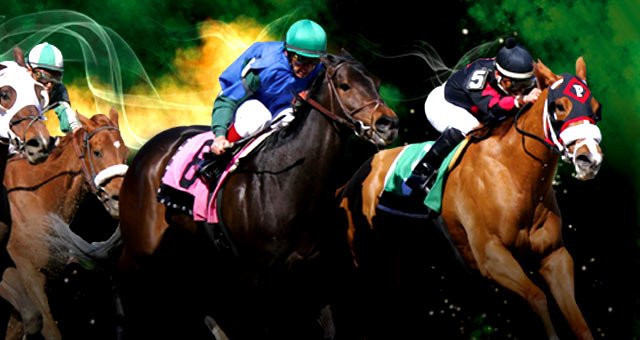 For horse racing fans, there's nothing more exciting than the possibility of a Triple Crown winner. It's the greatest honor a thoroughbred can achieve, and only eleven horses have won this elusive title.

In order to capture a Triple Crown, a horse must win three different races in five weeks—the Kentucky Derby, the Preakness Stakes and the Belmont Stakes—a difficult feat to accomplish for young, three-year-old thoroughbreds. The first horse to win all three races and the Triple Crown title was Sir Barton in 1919 and the most recent was Affirmed in 1978.

Each of these races is rich with history and tradition and Potawatomi Bingo Casino plans to bring you every second of the excitement. Whether you love the sport of horse racing or if you just like to immerse yourself in the culture of these grand races, there's something for everyone to enjoy.

The Kentucky Derby
Also known as "The Run for the Roses" for the blanket of 554 red roses the winning horse receives, the Kentucky Derby is held annually on the first Saturday in May in Louisville, Kentucky. First run in 1875, this one-and-a-quarter-mile race is a cultural event that draws celebrities, revelers and, of course, true racing fans.

On race day, the horses aren't the only hot topic. They have strong competition with the large, elaborate hats adorning the heads of the women attending the day's festivities. It's a tradition that has turned into a fashion show of who's who in "Millionaire's Row"—the prestigious box seats with the best views of the race.

The drink of choice of the Kentucky Derby is the Mint Julep. It's an iced beverage consisting of bourbon, mint and sugar syrup. A popular dish served on Derby Day is burgoo—a thick stew of beef, chicken, pork and vegetables.

The race itself only lasts about two minutes and is the first jewel in the Triple Crown. Once the winner crosses the finish line, all thoughts turn to whether or not the horse has a shot at the coveted crown.

The Preakness Stakes
The third Saturday of May, two weeks after the Kentucky Derby, is the Preakness Stakes—the second jewel of the Triple Crown. It is held at the Pimlico Race Course in Baltimore, Maryland and is a 13⁄16-mile race.

The Preakness is two years older than the Derby, dating back to 1873, and has many traditions of its own. The crowd sings "Maryland, My Maryland" to kick off the race, which is also referred to as "The Run for the Black-Eyed Susans." The winning horse will be presented with a blanket of Maryland's state flower.

After the winner of the Preakness has been officially declared, a painter climbs to the top of the clubhouse to repaint the horse and rider on the weather vane to mirror the colors of the winning jockey's silks.

Traditions aside, all eyes will be on the Derby winner to see if the horse can pull off a win for the chance at the Triple Crown title.

The Belmont Stakes
The oldest of the three races, the Belmont Stakes—held in Elmont, New York—had its first run in 1867 and is considered the most challenging race due to the daunting 1½-mile length. Most three year olds are not experienced enough or have the stamina, to maintain top speeds for that long of duration.

In addition, jockeys can have a hard time positioning the horse on a track that size and determining when to make the move for the lead. For these reasons, the race has been dubbed the "Test of the Champion."

What do you think? Will there finally be a Triple Crown winner this year? The speculation begins with the Kentucky Derby—be a part of it at Potawatomi Bingo Casino!